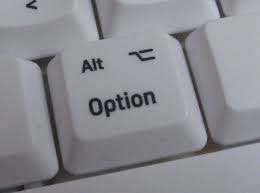 The Alt key actually exists on the Mac. And it is called Option key. Mac and PC keyboards differ subtly. Switching involves two big adjustments: figuring out where specific Windows keys went (like Alt and Ctrl)—and figuring out what to do with special Macintosh keys (like Option).

Windows Alt shortcut on Mac, which can be especially helpful for users who are new to Mac:

Alt key On Mac keyboards, a key on the bottom row is labeled both Alt and Option. This is the closest thing a Mac does to the Windows Alt key. Keyboard shortcuts that involve the Alt key in Windows use the Option key on the Mac. For example, in Microsoft Word, the keyboard shortcut for the Split Document Window command is Alt+Ctrl+S in Windows, but Option-⌘-T on the Macintosh. Still, these two keys are not exactly the same. While the most popular function of the Alt key is to control menus in Windows programs, the Option key on the Mac is a “miscellaneous” key that triggers cryptic functions and special characters.

Some mac and windows keys:

On keyboards without a dedicated block of number keys, you get these functions by holding down Fn as you tap the ← and → keys.

Pg Up, Pg Down: These keys scroll up or down by one screenful. The idea is to let you scroll through word-processing documents, Web pages, and lists without having to use the mouse.

On keyboards without a numeric keypad, you get these functions by pressing Fn plus the ↑ and ↓ keys.

Esc: Esc stands for Escape, and it means “cancel” It’s fantastically useful. It closes dialog boxes, closes menus, and exits special modes like Quick Look, slideshows, screen savers, and so on. Get to know it.

Option: The Option key (labeled Alt on keyboards in some countries) is sort of a “miscellaneous” key. It’s the equivalent of the Alt key in Windows.

What and Where is the Option Key on Mac?

Many Mac users wonder where to find the Option key on Mac. And it’s hardly surprising that many newcomers to Apple computers might be a little stumped. View any Apple Macintosh keyboards sold in the UK between 2006 and 2017.
The Option key on the Mac, known as the Alternate key, is usually labeled with the Alt and symbol. On Apple keyboards this is usually between the Command and Ctrl keys on the left side of the bottom row.
Like some Mac keyboards, Windows keyboards also lack the option key. It is possible to use a Windows keyboard with a Mac. The Alt key is used when the Option key is called for. The Alt key will be familiar to Windows PC users as the key immediately to the left of the spacebar. If you plug a Windows or IBM PC keyboard into a Mac, pressing the Alt key has the same effect as pressing the Option key.

Many of our customers have used a PC before and then decided they want to switch to a Mac for better performance, better design or better security. However, he feared he would have a hard time getting used to the macOS keyboard. We hear questions like, “How do I close a window? The Mac keyboard doesn’t have an Alt+F4 shortcut.” We always give them two answers: