Some common classifications of computers 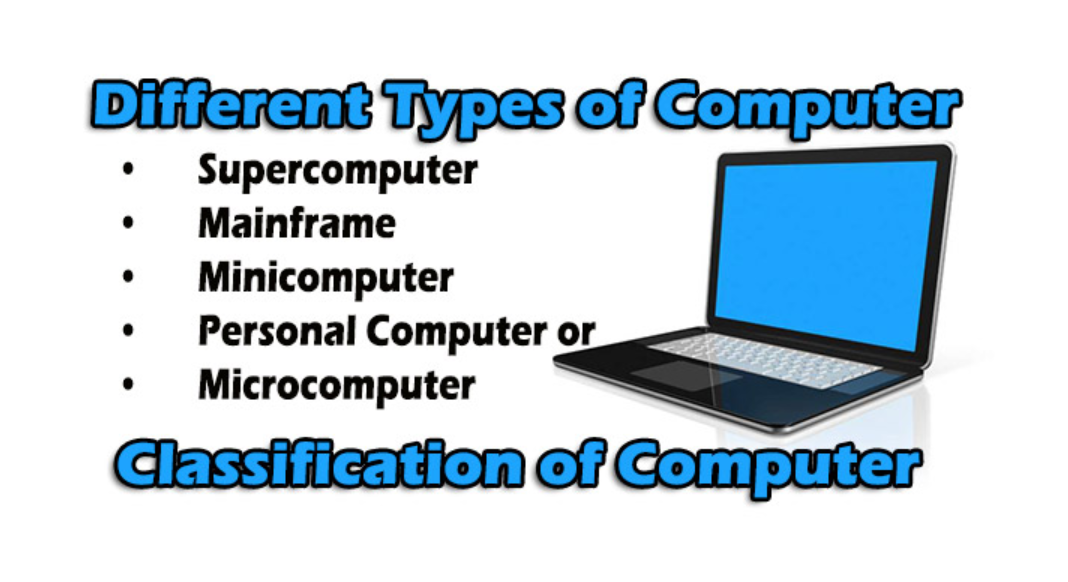 In this article we will describe about common classifications of computers.

Some common classifications of computers are given below.

Microcomputers became the most common type of computer in the late 20th century. The term “microcomputer” was introduced with the advent of systems based on single-chip microprocessors. The best-known early system was the Altair 8800, introduced in 1975. The term “microcomputer” has practically become an anachronism.
These computers include:
Desktop computers , Laptops and notebook computers , Tablet computer , Smartphones, smartbooks, and palmtop computers , Programmable calculator , Video game consoles, Handheld game consoles.

Minicomputers (colloquially, minis) are a class of multi-user computers that lie in the middle range of the computing spectrum, in between the smallest mainframe computers and the largest single-user systems (microcomputers or personal computers).Superminis (such as the DEC VAX or Data General Eclipse MV/8000) were usually 32-bit at a time when most minicomputers (such as the PDP-11 or Data General Eclipse or IBM Series/1) were 16-bit. These traditional minicomputers in the last few decades of the 20th century, found in small to medium-sized businesses, laboratories and embedded in (for example) hospital CAT scanners, often would be rack-mounted and connect to one or more terminals or tape/card readers, like mainframes and unlike most personal computers, but require less space and electrical power than a typical mainframe. The contemporary term for minicomputer is midrange computer, such as the higher-end SPARC, POWER and Itanium-based systems from Oracle Corporation, IBM and Hewlett-Packard, and the size is now typically smaller, such as a tower case.

A mainframe computer, informally called a mainframe or big iron,is a computer used primarily by large organizations for critical applications like bulk data processing for tasks such as censuses, industry and consumer statistics, enterprise resource planning, and large-scale transaction processing. A mainframe computer is large but not as large as a supercomputer and has more processing power than some other classes of computers, such as minicomputers, servers, workstations, and personal computers. Most large-scale computer-system architectures were established in the 1960s, but they continue to evolve. Mainframe computers are often used as servers.
The term mainframe was derived from the large cabinet, called a main frame,that housed the central processing unit and main memory of early computers. Later, the term mainframe was used to distinguish high-end commercial computers from less powerful machines.

Since 2017, there are supercomputers that can perform more than 1017 FLOPS. Supercomputers play an important role in the field of computational science, and are used for a wide range of computationally intensive tasks in various fields, including Quantum mechanics, weather forecasting, climate research, oil and gas exploration, molecular modeling and physical simulations (such as simulations of the earliest moments of the universe, airplane and spacecraft aerodynamics, the explosion of nuclear weapons, and nuclear fusion). They have been essential in the field of cryptanalysis. Supercomputers were introduced in the 1960s, and were the fastest built for several decades by Seymour Cray at Control Data Corporation (CDC), Cray Research and. Subsequent companies with his name or monogram. The first machines of this kind were highly tuned conventional designs that ran more quickly than their more general-purpose Contemporary. Over the course of the decade, an increasing amount of parallelism was added, with one to four processors typical. In the 1970s, vector processors were operating A notable example is the highly successful Cray-1 of 1976. Vector computers remained the dominant design in the 1990s.

In computing, a server is a piece of computer hardware or software (computer program) that provides functionality for another program or device, called a “client”. This The architecture is called the client-server model. Servers can provide various functionalities, often referred to as “services”, such as sharing data or resources among multiple Performing calculations for the client, or the client. A single server can serve multiple clients, and a single client can use multiple servers. The client process can start Can connect to a server on the same device or a different device on a network. Typical servers are database servers, file servers, mail servers, print servers, Web Servers, Game Servers and Application Servers Client–server systems are usually implemented by (and often identified with) the request–response model: the client sends a request to the server, which performs some action and sends a response to the client, usually with a result or acknowledgment. With. Designating a computer as “server-class hardware” implies that it is specific to the server to run on. This often means that it is more powerful and reliable than standard personal computers, but alternatively, large computing clusters can be composed of many relatively simple, replaceable server components. other more information about server types then visit types of server link.

A workstation is a specialized computer designed for technical or scientific applications. Primarily intended to be used by one person at a time, they are usually connected to a local area network and run multi-user operating systems. The term workstation has also been used loosely to refer to everything from mainframes. Computer terminals for a network-connected PC, but the most common form refers to a class of hardware offered by several existing and defunct companies such as Sun Microsystems, Silicon Graphics, Apollo Computer, DEC, HP, NeXT and IBM who made their debut in the 1990s. The end of the decade opened the door to the 3D graphics animation revolution. Workstations can handle various types of complex data such as 3D mechanical design, engineering simulations (eg, computational fluid dynamics), animation and rendering of images, and mathematical plots. Typically, the form factor is that of a desktop computer, with a higher . Contains resolution displays, a keyboard and a mouse at least, but many displays, graphics tablets, 3D mice (devices for manipulating 3D objects and Navigating View), etc. Workstations were the first segment of the computer market to introduce advanced accessories and collaboration tools. The increasing capabilities of mainstream PCs in the late 1990s have blurred the lines between PCs and technical/scientific workstations. specific workspace pre-working proprietary hardware that differentiated them from PCs; For example IBM usedb RISC-based CPUs for their workstations and Intel x86 CPUs for this. Business/consumer PCs during the 1990s and 2000s. However, this distinction largely disappeared in the early 2000s, as workstations now use highly commodity hardware. it was dominated by large PC vendors such as Dell, Hewlett-Packard (later HP Inc. and Hewlett Packard Enterprise) and Fujitsu selling Microsoft Windows or Linux systems. Running on x86-64 processor.

An embedded system is a computer system—a combination of a computer processor, computer memory, and input/output peripheral devices—that has a dedicated function within a larger mechanical or electronic system. It is embedded as part of a complete device often including electrical or electronic hardware and mechanical parts. Because an embedded system typically controls physical operations of the machine that it is embedded within, it often has real-time computing constraints. Embedded systems control many devices in common use today. In 2009 it was estimated that ninety-eight percent of all microprocessors manufactured were used in embedded systems. Modern embedded systems are often based on microcontrollers, but ordinary microprocessors are also common, especially in more complex systems. In either case, the processor used may be types ranging from general purpose to those specialized in a certain class of computations, or even custom designed for the application at hand. A common standard class of dedicated processors is the digital signal processor.
Since the embedded system is dedicated to specific tasks, design engineers can optimize it to reduce the size and cost of the product and increase the reliability and performance. Some embedded systems are mass-produced, benefiting from economies of scale.
Embedded systems range in size from portable personal devices such as digital watches and MP3 players to bigger machines like home appliances, industrial assembly lines, robots, transport vehicles, traffic light controllers, and medical imaging systems.
Often they constitute subsystems of other machines like avionics in aircraft. Large installations like factories, pipelines and electrical grids rely on multiple embedded systems networked together. Generalized through software customization, embedded systems such as programmable logic controllers frequently comprise their functional units.
Embedded systems range from those low in complexity, with a single microcontroller chip, to very high with multiple units, peripherals and networks, which may reside in equipment racks or across large geographical areas connected via long distance communications lines.

A personal computer has one user who may also be the owner. This user often may use all hardware resources, has complete access to any part of the computer and has rights to install/remove software. Personal computers normally store personal files, and often the owner/user is responsible for routine maintenance such as removing unwanted files and virus-scanning. Some computers in a business setting are for one user but are also served by staff with protocols to ensure proper maintenance.

These are computers where different people might log on at different times; unlike public computers, they would have usernames and passwords assigned on a long-term basis, with the files they see and the computer’s settings adjusted to their particular account. Often the important data files will reside on a central file server, so a person could log onto different computers yet still see the same files. The computer (or workstation) might be a “thin client” or X terminal, otherwise it may have its own disk for some or all system files, but usually will need to be networked to the rest of the system for full functionality. Such systems normally require a system administrator to set up and maintain the hardware and software.

Computers that are used just to display selected material (usually audio-visual, or simple slide shows) in a shop, meeting or trade show. These computers may have more capabilities than they are being used for; they are likely to have WiFi and so be capable of Internet access, but are rarely firewalled (but have restricted port access or monitored in some way). Such computers are used and maintained as appliances, and not normally used as the primary store for important files.