What Does OFC Mean? 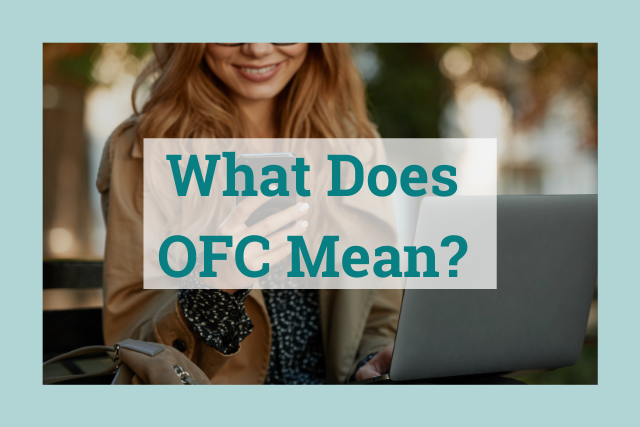 OFC is an abbreviated internet acronym for ‘of course’ which is used as an expression of agreement or as confirmation of a statement. It’s used in online chats as a shorthand. You can also use OFC in tweets, YouTube comments, or other social media posts. You can write this abbreviation in both lowercase and uppercase; however, the lowercase ‘ofc’ is significantly more common in text messages. The first definition of OFC on the web slang repository Urban Dictionary was created in June 2004 and read “used in instant messaging to represent course.” However, it was likely to have widespread use before 2004 in early Internet communication channels such as IRC and bulletin boards. ofc is an informal slang term used to refer to quicker typing and not in professional situations or official correspondence.

Ofc is often used to reiterate that something is clearly true.
Example: If someone asks you if you prefer the mountains or the beach, you might respond with, ‘The beach, ofc’ if you’re a lifelong surfer.

OFC can also be used to indicate that you have a certain opinion about something.
Example: Someone might ask you if you enjoy pineapples on pizza. If you hate pineapples on pizza, you might say, ‘Ofc fruit does not belong on pizza’.

OFC can be used both at the beginning and at the end of the sentence. The meaning of OFC changes in both places.

If you use ‘ofc’ at the beginning of a sentence, it often means something positive and definite.
Example-1: If you want to reiterate to your roommate that you’re going to clean the apartment, you might message them, “Ofc I’m going to clean up this weekend!”
Example-2: If your friend texts you, ‘Are you coming to my birthday party this weekend?’ you might respond with ‘Ofc I’m going!’ Sending a message with just ‘ofc’.

ofc should not be used when talking to your boss, your clients or when talking to someone because of your office work. ofc should only be used when texting with peers as the level of clarity and level of informality with them is completely different. So be careful about it while interacting with an officer. The more formally you talk to them, whether through messages or face-to-face, don’t use abbreviations to convey your message to them.

How informal it sounds when you talk to your boss in abbreviations and abbreviations. For example:
Boss: Jiya, have you emailed the parcel to the company? They needed it urgently today.
Jiya: Ofc I have, sir.

Now compare this same conversation by using ‘Of Course’. For example:
Boss: Jiya, have you emailed the parcel to the company? They needed it urgently today.
Jiya: Of course I have, sir.

We have try to define “What Does OFC Mean“. Hope you are like it! Thanks for reading this article. If you want to know details about What Does WYA Mean. Click Here