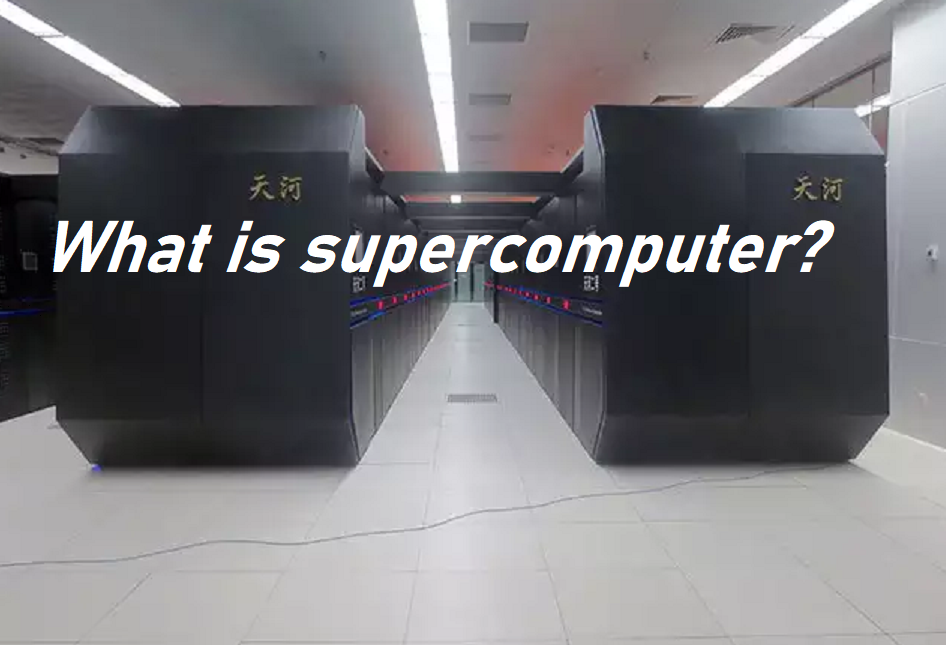 Supercomputer, any of a class of extremely powerful computers. Supercomputing is a form of high-performance computing that determines or calculates using a powerful computer, a supercomputer, reducing overall time to solution. The term is commonly applied to the fastest high-performance systems available at any given time. Such computers have been used primarily for scientific and engineering work requiring exceedingly high-speed computations. Performance of a supercomputer is measured in floating-point operations per second (FLOPS) instead of million instructions per second (MIPS).

Supercomputer size: In contrast, a supercomputer has a capacity of 200 to 300 gigabytes or more. Another useful comparison between supercomputers and personal computers is in the number of processors in each machine.

Examples where supercomputers are used:

What is supercomputing used for?

Supercomputers is basically used by corporations and government organizations to simulate outcomes. These blazing fast computers can be used for everything from finding new oil repositories to developing new life-saving medicines. In fact, supercomputers all over the world are being used to assist in research and development.

Where are supercomputer used?

Traditional uses for supercomputers have been in oil and gas exploration, converting seismic data into maps that indicate where to drill oil and/or gas wells. They are employed in engineering simulations such as fluid dynamics calculations on automobiles that look at drag and aerodynamic efficiency.

In 1960, UNIVAC created the Livermore Atomic Research Computer (LARC), which is today considered the first supercomputer for the US Navy Research and Development Center. It still uses high-speed drum memory instead of the newly emerging disc drive technology. In addition, the first supercomputers were the IBM 7030 Stretch. The IBM 7030 was built by IBM for the Los Alamos National Laboratory, which requested a computer 100 times faster than any existing computer in 1955. The IBM 7030 used transistors, magnetic core memory, pipelined instructions, data prefetched via memory controllers, and included the pioneering random access disk drive. The IBM 7950 became the basis for the Harvest, a supercomputer designed for cryptanalysis.

The CDC 6600, designed by Seymour Cray, was finished in 1964 and marked the transition from germanium to silicon transistors. Silicon transistors could run more quickly and the overheating problem was solved by introducing refrigeration to the supercomputer design.

Seymour Roger Cray (September 28, 1925 – October 5, 1996) was an American electrical engineer and supercomputer architect who designed a series of computers that were the fastest in the world for decades, and founded Cray Research which built many of these machines. Called “the father of supercomputing”, Cray has been credited with creating the supercomputer industry. Joel S. Birnbaum, then chief technology officer of Hewlett-Packard, said of him: “It seems impossible to exaggerate the effect he had on the industry; many of the things that high performance computers now do routinely were at the farthest edge of credibility when Seymour envisioned them.

Babayan and his team built their first computer during the 1950s. In the 1970s, chief architect V.S. Being one of Burtsev’s 15 deputies, he worked on the first superscalar computer, Elbrus-1, and the programming language ль-76. Using these computers in 1978, ten years before commercial applications appeared in the West, the Soviet Union developed its missile systems and its nuclear and space programs.

Supercomputers have some unique characteristics. Here we will tell you about those features:

Here’s the 10 fastest supercomputers in the world:

TOP 10 FASTEST SUPERCOMPUTERS IN THE WORLD:

In this article we have try to define “what is supercomputer?”. Hope you are like it! Thanks for reading this article.