How many MB in a GB? 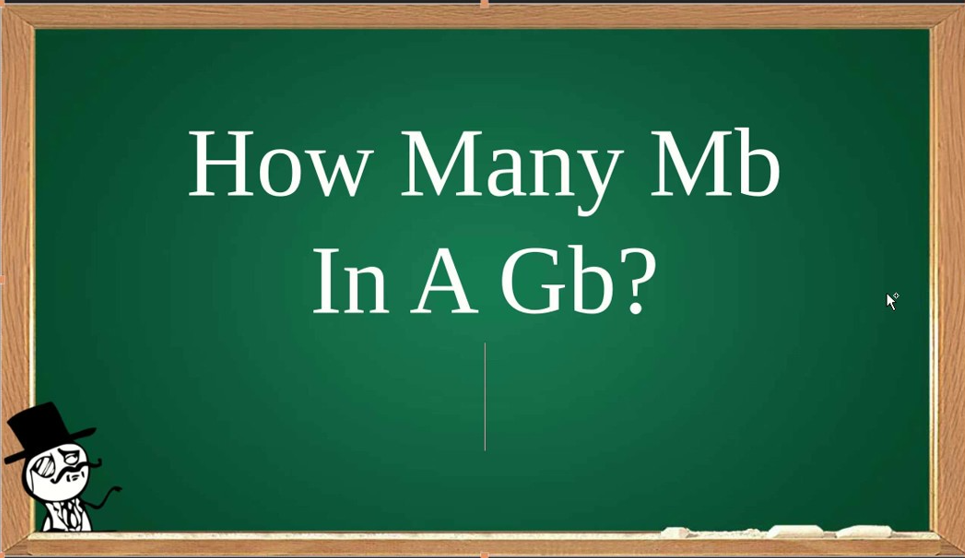 Now a days storage space is measured in gigabytes ( GB ) or megabytes ( MB ). All most all kinds of devices like PC’s, laptops, Mobile phones coming up with a few GB’s of RAM and a few TB’s of disk storage for apps, images, music and etc. in this article we will show you how many MB in a GB.

How many MB is 1GB of data?

1,000MB
A GB (gigabyte) is a way of measuring how much data you have on an electronic device. 1GB is approximately 1,000MB (megabytes).

Difference between megabyte and gigabyte:

A megabyte (symbol: MB) is equal to 106 bytes (10002 bytes), where a byte is a unit of digital information that consists of eight bits (binary digits).

The megabyte is based on the byte, which is derived from the bit, and is a unit that makes use of SI (International System of Units) prefixes. The prefix “mega” can be ambiguous; the SI use of “mega” would indicate that a megabyte is 1,000,000 bytes, or 10002 bytes, but a base of 1024 (rather than 1000) is also used in information technology as a convenient way to express byte multiples as powers of 2. In 1998, the International Electrotechnical Commission attempted to address this by defining new prefixes to indicate a base of 1024 rather than 1000. Rather than using the prefix “mega,” within this system of prefixes, 10242 is referred to as a mebibyte.

Megabytes are widely used in data storage for file sizes (documents, photos, videos, etc.) as well as for storage devices such as flash drives or, in the past, floppy disks. Today however, storage devices are typically larger, often involving either gigabytes (10003 bytes) or terabytes (10004) of data.

A GB (gigabyte) is a way of measuring how much data you have on an electronic device. 1GB is approximately 1,000MB (megabytes).

The gigabyte is based on the byte, which is derived from the bit, and is a unit that makes use of SI (International System of Units) prefixes. The gigabyte is most commonly understood in terms of its decimal definition of 10003 bytes. There is also however, a binary definition where a gigabyte is 10243 bytes. Because this can be the source of confusion, in 1998, the International Electrotechnical Commission published standards that required the gigabyte strictly denote 10003 bytes. Prefixes to denote the byte being based on 1024 rather than 1000 were also created, with gibibyte referencing 10243 bytes. Despite this effort, the gigabyte is still often used to signify either of these definitions.

The unit of bytes and all its multiples are used worldwide for data storage. Computer files, hard disks, Blu-ray discs, video games, etc. all store or contain storage space referenced in byte multiples such as kilobytes, megabytes, or gigabytes.

How to convert megabyte to gigabyte?

How many megabytes are in gigabyte?

We will say there are 1000 kilobytes in a megabyte (MB). And 1000 megabytes in a gigabyte (GB), commonly called a gig of data. It takes care of the math, but what about the real-world implications? We have broken down the different kinds of data sets into small, medium, large and extra-large buckets.

MEDIUM –UP TO 500 MB:
When Wi-Fi is not available and sending and receiving emails, visiting websites when settling bets, and posting occasional social media updates.
then use Mb data.

More than 1,425 emails (with attachments) sent or received
More than 250 web pages or
streaming music for 500 minutes or
Downloaded or uploaded 250 photos
Video streaming in high-definition for 30 minutes
Downloads of 125 apps

LARGE – UP TO 1000 MB:
We call the “large bucket,” which lets anyone with Wi-Fi access worry a lot less about mobile data. You may be able to save even more if there is more than one light mobile data usage on your account.