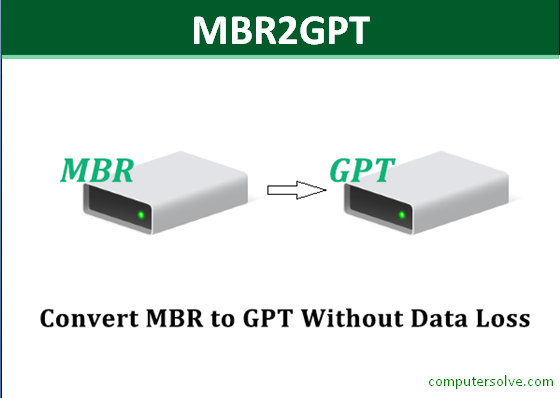 MBR2GPT is a Windows 10 v1703 and later versions built-in tool that converts an MBR (Master Boot Record) disk to a GPT (GUID Partition Table) disk without deleting or modifying our data on the disk.

MBR2GPT.EXE is located in the Windows\System32 directory on a computer running Windows 10 version 1703 or later. We can run the tool from Windows PE (Windows Preinstallation Environment) command prompt and from the Windows 10 OS as well.

Why use mbr2gpt tool to convert MBR to GPT?

Since, MBR and GPT are two different disk partition styles. The disk is used to store data after the partition style is selected during initialization that includes storage of the operating system. The initialized disk is called as MBR/GPT disk.

While GPT does not have these restrictions, so the GPT disks are most commonly used now. If you want to upgrade to Windows 11, when we want to convert the MBR system disk to GPT, we should convert MBR2GPT tool for Windows 11.

How to convert MBR to GPT using the built-in MBR2GPT.exe tool?

NOTE: MBR2GPT can only be used from the Windows Preinstallation Environment. To use it from your Desktop, you have to use /allowFullOS to override.