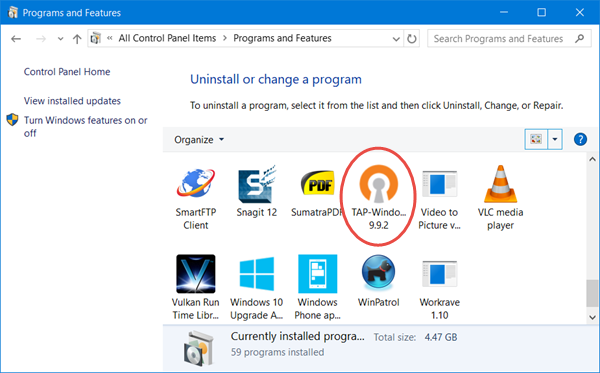 Some users have reported problems with their Internet connection while Tap Windows is enabled. If you’re experiencing the same thing, don’t fret! Today, we are going to explain Tap Windows adapter v9 and how to remove/reinstall it. If you use Windows VPN to protect your personal data, Tap Windows Adapter v9 is something you need to know. Basically, it is a virtual network interface that provides the ability for a VPN client to facilitate a VPN connection.

What is Tap Windows Adapter V9?

Most VPN software install a particular network driver called Tap Windows. The Tap Windows Adapter V9 is a virtual network interface that provides the functionality needed by various VPN clients to facilitate a VPN connection. The Tap Windows Adapter V9 driver is installed in C:/Program Files/Tap-Windows. The adapter typically appears in Device Manager after the installation of a VPN client and is used by most VPN suites as an alias for connecting to the Internet privately.

VPN is the acronym for Virtual Private Network. Its functions let you access websites that are blocked in your country, give you privacy from internet providers, hackers, ISP’s or sites that collect data, and speeds up your server connections by using private, direct routes. Using a VPN is recommended by many IT experts, as it reduces the risk of many online and spy attacks. Both home and business users can enjoy the benefits of a private connection, making VPNs a useful technology for many. With the dangers of surfing online, more and more people look into solutions to keep their privacy on the internet. A popular choice is using a VPN, which often requires the installation of files on your device. If you’re a frequent VPN user, you might’ve come across one of these files; the TAP-Windows Adapter v9.21.2.

You use the Windows VPN programs to protect your data. You should be aware of the Tap Windows Adapter v9. In a nutshell, it’s a virtual network interface. It allows VPN clients to establish a VPN connection.
However, while It is enabled, some customers have reported issues with their Internet connection. I will go through what Tap Windows is and how to uninstall and reinstall it.

Use methods to solve the issues with internet connection:

Some users are reporting that their internet connection is not working when Tap Windows Adapter V9 is enabled or the adapter is enabled automatically on next boot after it is disabled from Device Manager. So to solve this problem, we will use restart, reinstall, and remove method.

Sometimes you might need to reinstall your TAP-Windows Adapter. This is to ensure no corruption is causing issues with your internet connection. While this might seem like a difficult task, given the fact that it’s a necessary driver for VPNs, it’s actually very quick and easy. Reinstall the tap windows version 9.9 x by following the below procedure.

Above indicates that there’s a problem with the Tap Windows Adapter, so restarting it can help. Just follow this easy guide to restart the Tap Adapter:

I hope a beginner’s guide has given you a better understanding of the TAP-Windows Adapter v9. how to resolve issues with it.