What is the purpose of an input device? 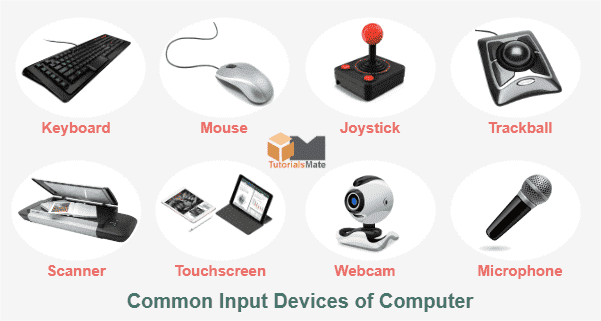 For example, our computer transfers data to a hard disk where it gets stored this is output, and gets it back from the disk to run a program or process data so this is input.

What is input device?

Input devices are those devices by which we can input our data or instructions into the computer. Input devices facilitate communication between a computer and a human. Data can be text, graphics or sound etc. There are many types of input devices we can explain below.

Keyboard is a input device of computer. It include various keys that are:

alphanumeric keys– These keys include the same letter, number, punctuation, and symbol keys found on a traditional typewriter.

Function keys- Function keys perform specific tasks that labeled as F1, F2, F3, and so on, up to F12. The functionality of these keys differs from program to program.

Navigation keys- Navigation keys are used for moving around in documents or webpages and editing text. They include the arrow keys, Home, End, Page Up, Page Down, Delete, and Insert.

A computer mouse (plural mice, sometimes mouses)[nb 1] is a hand-held pointing device that detects two-dimensional motion relative to a surface. originally all mice were connected to a computer by a cable, some modern mice are cordless, relying on short-range radio communication with the connected system.

In addition to moving a cursor, computer mice have one or more buttons to allow operations such as selection of a menu item on a display. Mice often also feature other elements, such as touch surfaces and scroll wheels, which enable additional control and dimensional input.

Also known as a trackpad, a touchpad is a common substitute for a computer mouse. It is essentially a specialized surface that can detect the movement of a user’s finger and use that information to direct a pointer and control a computer. Touchpads were first introduced for laptops in the 1990s, and it’s now rare to find a laptop without one.

Scanner is an input device. it is used to transfer images into a computer, where the signal is converted into a digital image. when digital image can viewed on a monitor screen, saved, edited, emailed, or printed.

Digital cameras is an input device it can used to capture photographs independently. photo and video files can be transferred to a computer by connecting the camera directly with a cable, removing the memory card and slotting it into the computer, or through wireless data transfer methods such as Bluetooth. Once the photos are on the computer, they can be saved, edited, emailed, or printed.

A microphone captures audio and sends it to a computer where it is converted to a digital format. Once the audio has been digitized, it can be played back, copied, edited, uploaded, or emailed. Microphones can also be used to record audio or to relay sounds live as part of a video chat or audio stream.

Joysticks are commonly used to control characters and vehicles in computer video games. Many video gaming joysticks feature triggers and buttons that can be pressed to use weapons or projectiles in games. Essentially, a joystick is a handle that pivots on a base and sends its angle or direction to the computer as data.

What type of inputs do computer input devices record?

A computer can record any signal that can be digitised that reresented as 1s and 0s electronically. Several methods of getting digitised data into computer. These include: parallel port, serial port, PCI buss, USB port, PS2 port, Fire Wire, Thunderbolt, and a few others that do not come to mind. There are also manual methods of entering data, primarily the keyboard. Most computers also have two or more analog to digital converters built in. These are the microphone and/or line inputs.

Many computers also now have video cameras built in for inputting visual information directly. The challenge in recording external inputs is converting to digital data, using an available input port, and writing a program, or utilizing an existing program, to transfer the data to media such as the computer’s hard drive.

Function of input devices in a computer:

The function of an input device is to convey data to a PC or other kind of data preparing gear. Info gadgets are sorts of fringe gadgets that speak with handling units. The most well-known types of info gadget for PCs are consoles and mice.

There are four basic function of computer:

I hope I really wish you the best, whatever you have in mind. For more related information visit https://computersolve.com/what-is-the-purpose-of-an-input-device/.