Who Invented the Printing Press? 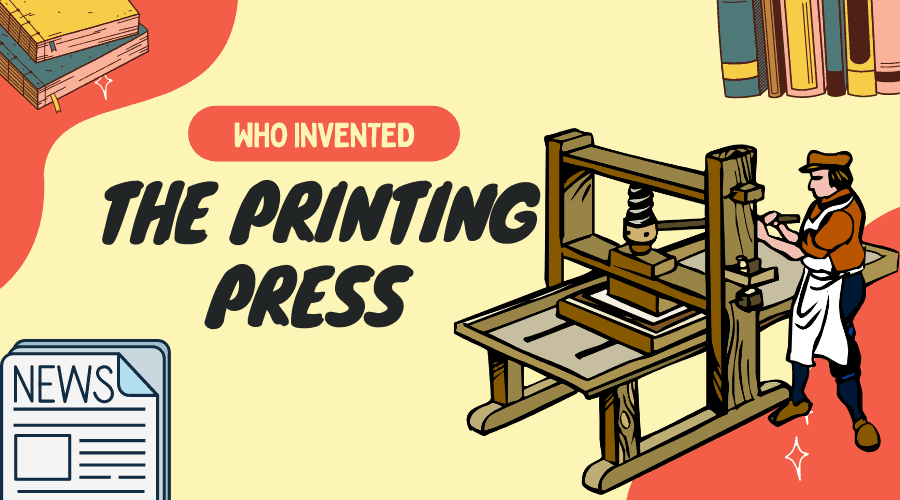 Gutenberg: The Man Behind The Printing Press

The printing press was invented in 1440 by German inventor Johannes Gutenberg, who was then only 23 years old. As one of the most revolutionary inventions in history, the printing press made it easier than ever to spread information to large audiences and helped fuel the Renaissance throughout Europe during the 15th century. It has since been modified and improved upon many times, but it all started with Johannes Gutenberg and his brilliant invention that completely changed the world forever.

Gutenberg then produced the Gutenberg Bible using his invention, with funding from Johann Fust who many believe to be either a goldsmith or banker. He used 300 separate molded letter blocks and 50,000 sheets of paper to create 180 copies of the bible.

How Does the Printing Press Works?

With the original printing press, a frame is used to set groups of type blocks. Together, these blocks make words and sentences; however, they are all in reverse. The blocks are all inked and then a sheet of paper is laid on the blocks. All of this passes through a roller to ensure that the ink is transferred to the paper. Finally, the paper is lifted, and the reader can see the inked letters that now appear normally as a result of the reversed blocks.

These printing presses were operated by hand. Later, in the 19th century, other inventors created steam-powered printing presses that did not require a hand operator. In comparison, today’s printing presses are electronic and automated, and can print much faster than ever before!

Today, there are multiple types of printing presses, each best for a specific type of printing. They include:

Similar in concept to Gutenberg’s press, letterpresses require an operator to set movable type, ink it, and press paper against it. The entire process is done by hand. The letterpress is often used by small, boutique printers, and offers a beautiful handmade look. However, it’s also inefficient and expensive compared to other printing presses.

The offset press revolutionized the printing industry, making it possible to print enormous quantities efficiently and cost-effectively. In a nutshell, modern offset printing involves using a computer to create a plate, which is then placed on a cylinder. Ink is applied to the plate cylinder, which rolls against a rubber cylinder, which in turn rolls the ink onto sheets of paper fed through the press. Offset presses are used to mass-produce newspapers, magazines, books, and other printed materials.

One of the few drawbacks to offset printing is that it’s not economical in low volumes, primarily because plates can cost several hundred dollars to produce. That’s insignificant when printing hundreds or thousands of the same item, but it can be costly when printing a few dozen or even a single copy. Digital presses make low-volume printing affordable and have similarly revolutionized the printing industry because they do not require plates. Instead, they use advanced inkjet or laserjet technology to transfer ink to paper.

Social Impact of the Printing Press

The printing revolution is a term used to describe the massive change in society that occurred with the invention of the printing press. It brought about a rapid change in literature and lowered the cost of books so that more people could own them.

This also led to a huge increase in literacy rates. Printing changed the way people communicated and social relationships. Previously, the written word was copied by hand, which was very time-consuming and expensive. Printers made an impression of an original document, which was then distributed to other printers, who in turn copied it by hand.