How to make space in html? 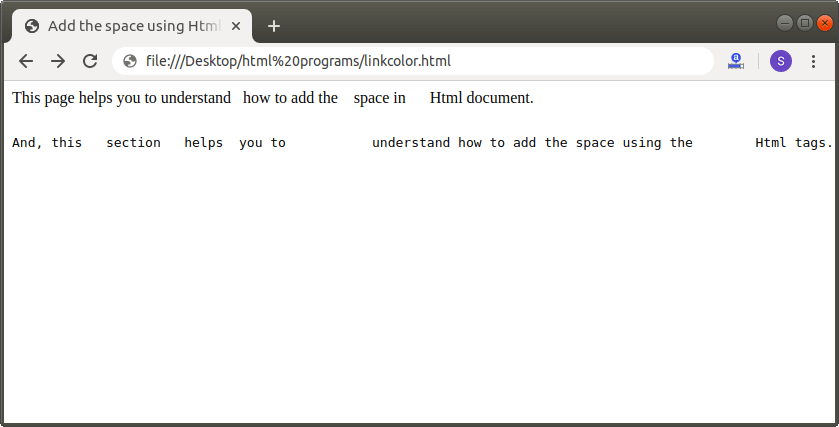 How to make space in html?

In HTML Adding extra space between words and paragraphs. if you want to add multiple adjacent spaces in HTML, hitting the spacebar repeatedly won’t work as it does in a plain text document. If you do this in HTML, the browser will condense the spaces you add down This behavior is called whitespace collapse browsers will display multiple HTML spaces as one space, and will also ignore spaces before and after elements and outside of elements. While this rule is sometimes inconvenient. for more information about html space see …..

Overview of Space in HTML:

The HTML <br>tag denotes a line break, like a carriage return in a word processing program. You’d use it at the end of each line of an address, for example, to get the block format people are accustomed to seeing.

Paragraph <p> tag generates a paragraph break. It is applied to a section of text that is a block of text separated from nearby blocks of text by a blank space and/or first-line indent.

<pre> tag is used with preformatted text. It instructs the browser that the text is to appear exactly as written in the HTML file, including any spaces or blank lines. If you type five spaces inside <pre> tags, you get five spaces on the website.character

&nbsp; character creates a space that does not break into a new line. Two words that are separated by a non-breaking space alwaysappear on the same line.

and &Tab; characters create tab spaces in HTML. Unfortunately, they can’t be used independently. Any time you want a tab in

HTML, you’ll either need to use one of these characters inside <pre> tag or fake it with CSS.
You can also add space around text using Cascading Style Sheets (CSS). If you’re looking to create spacing anywhere around a full block of text, this is absolutely the way to do it. CSS also affords plenty of stylistic controls for the text itself, making it the first choice for many web developers.

In this post, we’ll show your four fast ways to put extra spaces in your HTML document, plus some tips on adding spacing with CSS. You have several options for creating and controlling white space on your webpages:

This is a simplest way to add a space in HTML (besides hitting the spacebar) is with the non-breaking space entity, written as &nbsp Multiple adjacent non-breaking spaces won’t be collapsed by the browser, letting you “force” several visible spaces between words or other page elements.

non-breaking space will look just like a normal space.
two words or elements separated by   will always appear on the same line.

Finally, you can use the additional HTML entities &ensp or & emsp; to add two and four non-breaking spaces respectively:

avoiding line breaks may cause problems with rendering the content in the browser. Also, avoid using a non-breaking space for styling reasons, like indenting or centering an element on a page — styling should be handled with CSS.

Another way to prevent your HTML spaces from collapsing is by preformatting your HTML text, which retains all spaces and line breaks in your HTML. When the HTML is rendered in the browser, the text will look like it does in the HTML file. Preformatting is useful for text content with a visual component, like poetry or ASCII art.

To preformat your text, place it inside a <pre> tag:

If you want to insert a line break, use the HTML break tag, written as <br>. You don’t need a closing tag here just writing adds a line break. The break tag is meant for single line breaks, and not more than one in a row.

The break tag is useful for instances where a line break is necessary to understand the content, but where you don’t want to necessarily use a new paragraph element, such as in an address:

Paragraph <p> is a block-level element, which means that

(1) its default width is set to the width of the entire page.

(2) there is a line break before and after the block element.

With <p>, browsers will add some extra whitespace with this line break to make consecutive paragraphs more readable, so it can be used any time you’re using blocks of text that are distinct from each other.

I hope this article is helpful to you. Thank you!!