How much is a gigabyte ? 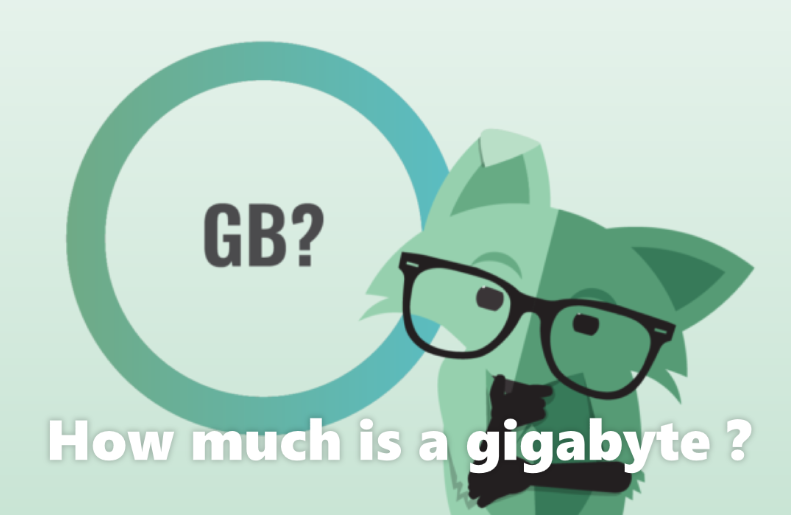 One gigabyte is equal to 1,024 megabytes. Data is measured all the way up to a “bit”.

A byte consists of eight bits consisting of a string of 0s and 1s. These eight bits can contain 256 values ​​ranging from 0 to 255. Generally, a byte is the number of bits used to encode a text character.

According to the International System of Units (SI from French : System international de units), the “giga” prefix refers to one billion (109 or 1,000,000,000) bytes. In computing terminology, a gigabyte can indicate either a certain amount of physical memory (data storage capacity in hard drives and solid-state drives) or data transmission speed. However, it is also used in information technology to designate the amount of RAM memory, i.e. 10,243 bytes, leading to some confusion (and even lawsuits against drive manufacturers in the United States).

Actually, in IT and Computer Science, one GB is equal to 1,073,741,824 (10,243 or 230) bytes. In 2000, the Institute of Electrical and Electronics Engineers (IEEE) incorporated the International Electrotechnical Commission’s (IEC) formal acceptance of SI metric prefixes. For example, one GB is one billion bytes, and one kilobyte (KB) is one thousand bytes.
By the end of 1999, the IEC formally recommended that gibi, the metric equivalent of giga, replace the giga prefix. In the 21st century, the term GB is used according to the context. Most computer networking companies use the SI prefix gibi for gibibyte (GiB). When referring to the amount of available RAM, the binary prefix is ​​used. Thus, one GB is equal to 10,243 bytes. Talking about disk storage, one GB is equal to about 109 bytes. Software and filing systems often classify file sizes using a binary and SI unit combination, such as GB or GiB.

Here are some practical examples of what a gigabyte of data translates to :

The price per GB of storage capacity varies by manufacturer and type of storage media, but has declined steadily and significantly over the years. From an average cost of $8 per GB of HDD memory in 2000, this fell to $0.022 in 2020. It is even more unbelievable that in 1981 a GB of memory cost about $500,000.

Why is it important to understand GB ?

It is important to understand what GB is and how computer companies use it. You’ve probably never seen the term gigabyte when buying a computer or computing device. Storage volume is usually measured in gigabytes, but will always be abbreviated to GB. For example, if I’m looking at the computer or tablet description, it can read 4GB which means four gigabytes. Devices with high gigabytes of storage are becoming more and more available. 124 GB is a typical amount of storage for many laptops and tablets, but many computing devices reduce this to 8 GB. It is important to understand how much a GB can store.

What is a gigabyte in the computer world ?

If you are not familiar with the technical language, you may not know what GB means in the computing world. GB is the abbreviation for gigabyte. A gigabyte is a measurement of data storage for computers, tablets, smartphones, gaming consoles, and other computing devices. In fact, most of the people have smart phones and have heard about the long abbreviations of GB. You may be familiar with the slang for gigabyte : gigs! Like how many gigs do you have on your phone? GB is simply an abbreviation for the word gigabyte.

A gigabyte is a specific unit of data that is approximately equal to 1 billion bytes of data. The term gigabyte is commonly used to describe the amount of data stored or the capacity of a storage device. For example, an HDD may offer 500 GB of raw capacity but is currently only storing 200 GB of data. In addition to stored data, gigabyte can also be used to refer to the amount of data transferred or to storage throughput.

Data capacity measurements larger than one gigabyte include the following :

How long can it take you to use 1 GB of data?

With today’s data-intensive workloads, a gigabyte of data can be used up quickly. A single-layer digital video disc (DVD) may only hold 4.7 GB of data, and a double-layer disc may only hold 8.5 GB, a drop in the bucket compared to a 10 TB HDD. Even a typical laptop or desktop computer has only 8 GB or 16 GB of RAM.

One gigabyte of data is equal to :

When and why have gigabytes been used ?

Until the early 1980s, a size specification in megabytes was sufficient for storage media. However, with increasing capacity, the megabyte has been replaced by the next largest unit of measurement – the gigabyte. In 1980, IBM released the first 1.28GB hard drive the size of a refrigerator. It took 10 years for the first computer with a 1GB drive to become commercially available. Thanks to ongoing technological advances, terabytes or even petabytes have become the more common units of measurement for hard disk drives.

Gigabytes are far from being obsolete. Today, GB is used to indicate the file size or storage capacity of a USB stick, external hard drive, CD-ROM or DVD. Commercially available memory cards in smartphones or tablets typically have storage capacities of 16, 32 or 64 GB. Mobile phone providers indicate monthly data volumes in GB, with contract guarantees. Cloud providers use this unit to calculate the cost of their storage capacity (for example, in cents per gigabyte).