What is an SSD Drive and how does it work ? 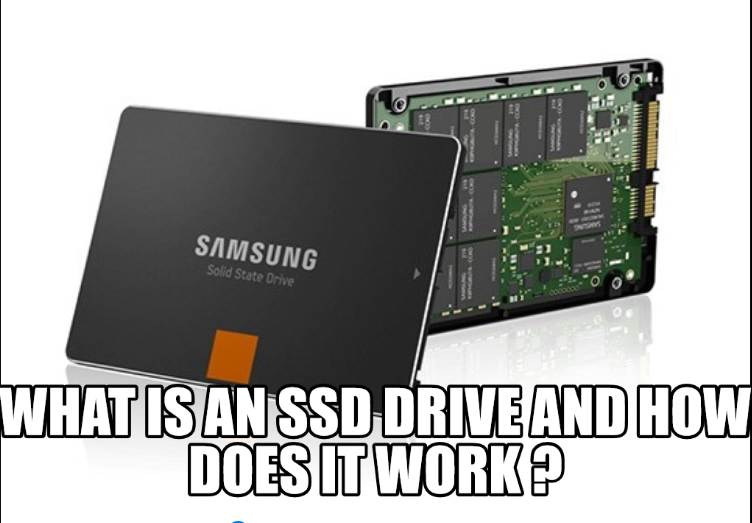 SSDs work like hard drives with different technology. Like USB drives, SSDs use flash memory to store data, which is then accessed digitally. A hard disk drive (HDD) uses a spinning platter and an arm that moves across the platter to read each piece of data. As a result, SSDs provide almost instant boot and load times because they do not have to mechanically seek data on the spinning plate.

What are the benefits of SSDs ?

The main benefit of electronic chips for storage is that they are much faster than HDD with a spindle inside. That is due to the fact that a normal HDD consists of many mechanical parts and rotating discs. Also, the re-positioning of the read/write head takes much more time than just pushing data through electronic interfaces. Additionally, SSDs have a very short access time, which makes them perfect for being used in environments where real time access and transfer is a necessity.

What is a solid state drive’s main use ?

In the private sector, ever more devices are equipped with SSDs. These include laptops, PCs, digital cameras, or digital music players. In PCs, SSDs are often installed as system disks for the operating system and programs, while a (often much larger) HDD stores work data. Smartphones and tablets usually have a shorter use life than non-mobile devices, so these are ideal candidates for the use of SSDs. All these devices benefit from the low weight, speed, and shock resistance of the SSD. The lower pricing of SSDs suggests that all storage solutions in the private sector will be equipped with SSDs in the future.

Professional or industrial applications are mainly high-performance servers like the IONOS server with SSD, as future-oriented storage solutions. However, high-end laptops or desktops are also equipped with SSDs. In addition, this storage technology is used where large amounts of information have to be provided in (near) real-time. This includes aerospace – flight recorders, for example – but also military settings.

How do solid state drives work ?

SSD or HDD work with your system’s memory and processor to access and use data. Solid state drives use different technology than traditional hard drives that allow SSDs to access data faster while improving your computer’s performance. This data includes things like your operating system, games, images or music.

For example, if you want to access data from a spreadsheet and do some basic editing, here’s what happens behind the scenes.

In addition to being faster, SSDs are more durable because they don’t have moving parts that can be broken or worn down, especially when they’re moved around. Plus, they use less energy, saving battery life.

How long does a SSD last ?

SSDs are fairly new to the market, meaning manufacturers are still trying to figure out how long they will last. Currently, vendors use three different factors to estimate SSD lifespan: the age of the SSD, the total number of terabytes written over time (TBW), and the drive writes per day (DWPD). Based on which metric you use, the answer to the question “How long do SSDs last?” will vary.

For example, the age of an SSD has proven to be a valuable determinate in its performance and longevity. Current estimates put the age limit for SSDs around 10 years, though the average SSD lifespan is shorter. In fact, a joint study between Google and the University of Toronto tested SSDs over a multi-year period. During that study, they found the age of an SSD was the primary determinant of when it stopped working. Researchers working on the study also found SSDs were replaced about 25% less often than HDDs.

Another way of measuring how long SSDs will last is the total number of terabytes written over time (TBW). TBW estimates how many successful writes you can expect a drive to make over its lifetime. If a manufacturer says their SSD has a TBW of 150, it means the drive can write 150 terabytes of data. After the drive hits that threshold, it’s likely you’ll need to replace it.

The final of the three metrics manufacturers might use when predicting the lifespan of their drives is the drive writes per day (DWPD). DWPD measures how many times users can overwrite the amount of available storage in the drive each day of its working lifespan. If an SSD has a capacity of 200 GB and comes with a five-year warranty, for instance, users can write 200 GB onto the drive every day for the warranty period before it fails. When in doubt, you can use an online SSD lifespan calculator to estimate the SSD’s lifespan.

Solid state drives are defined by three form factors; these are : the size of the drive, the type of connection interface, and the physical space the drive will occupy in the computer.

2.5-Inch SSD :
The standard form factor for an SSD is 2.5-inch, which fits inside the drive bay of most laptop or desktop computers. Because many users replace their hard drives with solid state drives, the 2.5-inch drive has become a standard for all HDDs and SSDs. They are designed to minimize the need to replace the connecting interface cables, making the transition to a higher performance drive as easy as possible. See the top 10 reasons to upgrade to an SSD.

mSATA SSD :
A smaller form factor SSD is called mSATA. mSATA SSDs are one-eighth the size of a 2.5-inch drive and are designed to plug into an mSATA socket on a system’s motherboard. mSATA drives are used in ultra-thin and mini devices, or as a secondary drive in desktops.

M.2 SSD :
The smallest form factor for SSDs is called M.2, which is about the size of a stick of gum. M.2 SSDs attach to the motherboard via an M.2 socket and are designed for space-constrained tablets and ultrabooks.

What is SSD in computers and how does the technology work ?

In an SSD, the information stored is written to semiconductor cells. These cells retain their status even when there is no power supply – the principle of flash memory. A single memory cell can only have two states: charged or uncharged. This method is called Single Level Cell (SLC) and is mainly used in very expensive, industrial SSDs. One cell corresponds to one bit which illustrates how many such cells are needed to realize one gigabyte (1 GB), for example 109 = 1 billion memory cells (exact value: 230 = 1,073,741,824). A single letter in ASCII coding alone consumes 8 bits. That might give you an idea of how much memory is needed for a text document or for images.

However, it is also possible to use different voltage sizes in one cell so that more than 1 bit can be stored per memory cell. This type of storage is called Multi Level Cell (MLC) and usually allows 2 bits per cell. So, more data can be accommodated in the space and it works out more cost-effective. Its disadvantage is the lower number of write cycles. Another compression step is called Triple Level Cell (TLC), which further reduces manufacturing costs.

Semiconductors have a limited lifespan. To counteract this, an SSD has internal monitoring that detects worn memory cells. This Bad Block Management marks cell blocks with declining memory cells as faulty and replaces them with cells from a reserve stock. Depending on the SSD design, this comprises two to seven percent of the total storage capacity and considerably extends the usage life of an SSD.

Hybrid hard disks (HHD), however, shouldn’t be forgotten. This is a combination of an HDD hard drive and SSD. The fast flash memory of the SSD can increase the overall speed of such a hybrid compared to normal HDDs but doesn’t come close to that of single SSDs.

Note : Click here to know more about the role of SSD in your computer – how long do ssd drives last