What is Mining Bitcoin? 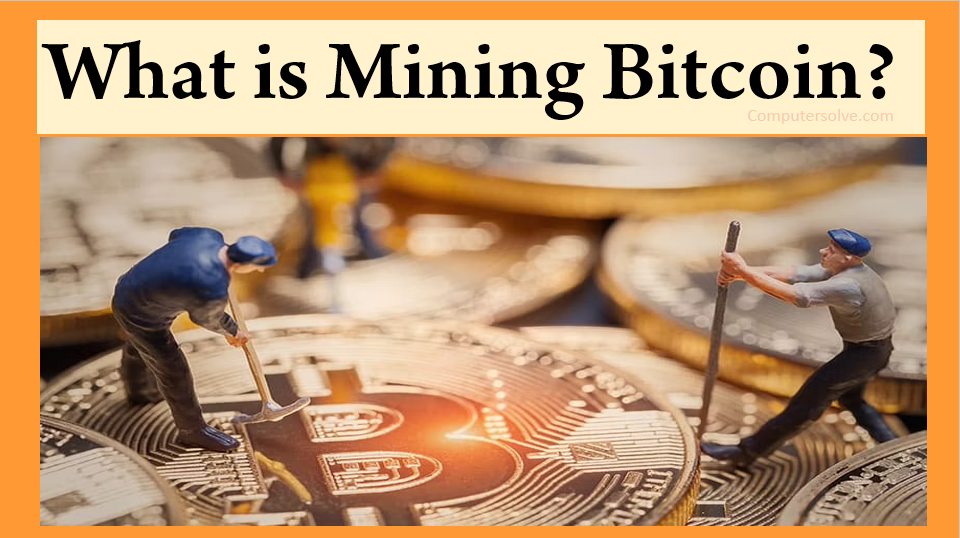 On hearing the name of mining, the first thing that comes to mind is to dig gold, diamond or coal. Crypto mining or bitcoin mining means to create new bitcoins by solving puzzles. Large computers work to generate bitcoins through hardware and software.

It is like a Bitcoin Data Center but it is Decentralized system which is controlled by Miners located all over the world, no single person can control it here.

Bitcoin mining is not only used to prepare new bitcoins, but it also contributes to other tasks such as sending bitcoins from one wallet to another, so even after the last bitcoin is mined, bitcoin mining will continue.

EXAMPLE:
The way we do a transaction to send money to someone, it first goes to the bank and then the bank validates it and sends it forward. In the case of Bitcoin, there is nothing like a bank between the sender of the coin and the receiver, but only computers.

There are three primary ways of obtaining bitcoin and other cryptocurrencies. You can buy them on an exchange like Coinbase, receive them as payment for goods or services, or virtually “mine” them. It’s the third category that we’re explaining here, using Bitcoin as our example.

When a bitcoin miner successfully finds a valid hash, a block is added to the blockchain, verifying the most recent batch of transactions.

Double-spending is the phenomenon wherein someone spends the same bitcoin twice. In addition to preserving the integrity of the blockchain, verification helps to prevent double spending.

The faster new blocks can be found because new miners and more computing power are being added to the network all the time, the difficulty of verifying these transactions must increase to maintain a stable flow of blocks.

Bitcoin “mining” serves a crucial function to validate and confirm new transactions to the blockchain and to prevent double-spending by bad actors. It is also the way that new bitcoins are introduced into the system.

Why is mining a Bitcoin important?

It verifies and secures the blockchain, which allows cryptocurrencies to function as a peer-to-peer decentralized network without any need for oversight from a third party.

Bitcoin (BTCUSD) is often referred to as digital currency and as an alternative to central bank-controlled fiat money. However, the latter is valuable because it is issued by a monetary authority and is widely used in an economy.

How long does it take to mine 1 bitcoin?

The average time for generating one Bitcoin is about 10 minutes, but this applies only to powerful machines. The speed of mining depends on the type of Bitcoin mining hardware you are using.

Is mining a bitcoin legal?

Bitcoin ownership and mining are legal in a growing number of countries. Algeria, Egypt, Morocco, Bolivia, Ecuador, Nepal, and Pakistan were among the countries where it was illegal, according to a 2018 report.