What is taskbar in computer? 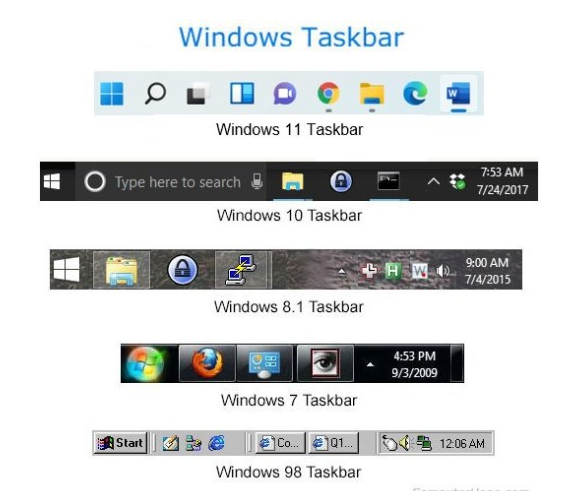 The taskbar is an element of an operating system located at the bottom of the screen. It allows you to locate and launch programs through Start and the Start menu or view any program that’s currently open. On the right side of the taskbar is the Notification Area that allows you to check the date and time, items running in the background. In this article we will show you about what is taskbar in computer.

The taskbar was first introduced with Microsoft Windows 95 and is found in all subsequent versions of Windows.

The picture above shows the Windows taskbar throughout Windows history. Except for the Quick Launch feature, the taskbar in Windows 95, 98, ME, NT 4.0 resembled the Windows 98 taskbar. Windows Vista and 7, Microsoft removed the Quick Launch, added the Start Orb, and allowed icons in the Windows Notification Area to be hidden. With Windows 8, Microsoft removed the Start button but later added it back in Windows 8.1. Windows 10 resembles Windows 8.1, but with a new Cortana search box. Windows 11 changes the look of the taskbar, centering the Start, Search, and Widget icons, and the pinned program icons.

If you want to know about why icons are not showing on taskbar then click here.

Some taskbar elements appears on task bar menu. these are explain below:

Steps to Pin and Unpin an Application from the Taskbar:

Pin an Application from the Taskbar:

Here are the steps to pin an application from the taskbar:

Unpin an Application from the Taskbar:

Here are the steps to Unpin an application from the taskbar:

I hope this article about What is taskbar in computer? is helpful for you.