How to Test Motherboard? 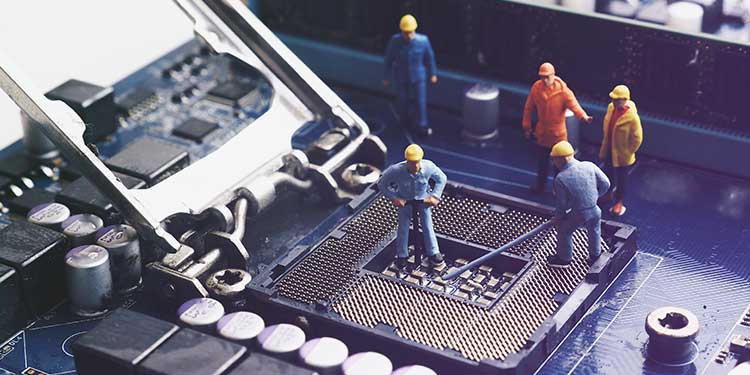 Is my motherboard dead? How can I test if my motherboard is defective? If you are looking for answers to these questions, you are in the right place.

The motherboard is one of the most important parts of a computer because it contains many important parts of the computer, including the CPU (central processing unit), memory, and connectors for output and input devices. This is comparable to the human brain.

If it’s bad, your computer is useless. However, if you are using a computer, you will not notice the performance on the motherboard. You can blame a dead motherboard for something else in your computer, because an unstable motherboard can affect the CPU, GPU, USB port, and so on.

How can you check the status of the motherboard? That’s what we’re talking about. We will now show you some relevant information in the following sections.

Motherboard and power supply problems can be the most challenging problem for computer diagnostics because it has many small components.

Because innovations provide easy and more user-friendly options for quickly diagnosing a motherboard problem, it’s up to you to do basic research.

Use the following list to quickly isolate any motherboard problems.

Motherboards perform a Power-on Self-Test (POST) each time the computer is turned on.

If all goes well, POST allows for automatic recovery and full startup.

2. Pay Attention to All Diagnostic Signals

System shutdown can be caused by faulty hardware and your motherboard can be the main problem.

It is better to pay attention to these signals, because they will guide you to solve the problem at every step.

If your motherboard has a problem, there is a good chance that you will not have access to the integrated BIOS / UEFI.

One way to prevent this is to use the appropriate UEFI program, which you can install on a USB boot drive.

Not only can you use it to test motherboard problems, but you can also discover problems with RAM, monitors, fans, and other components.

Sometimes the only problem is outdated BIOS settings. If you have access to UEFI, check for any available BIOS updates and download and install them immediately.

If no updates are available, look for the Reset or Reset button to reset the BIOS settings to default.

If the system is not running in the BIOS either, you may need to replace the CMOS battery.

Older motherboards still have a CMOS chip that stores boot settings so that the computer can start properly.

This CMOS chip requires a battery to store and retain BIOS data each time the computer is turned off.

If booting continues in the BIOS after replacing the CMOS battery, you may have problems with the motherboard.

You only need to return the correct date and time signals to the system clock.

A suspicion of a motherboard problem comes when you investigate partial problems that may occur with any part of your computer.

Another way to test motherboard problems is to just restart key components.

Remove unnecessary components such as sound cards, modems, and other peripherals. Next, remove and reset the RAM and CPU.

When repairing major components, make sure there are no loose connections anywhere on the system board. You can also add it by removing the hard drive.

You cannot boot the operating system without the primary boot drive, but you can check the entire BIOS settings.

If you have another working computer, add the next step by replacing its power supply (PSU) and graphics card with the same components on the faulty PC.

Then try turning on the wrong PC.

If all goes well, the motherboard is fine and the problem may be caused by one or more components that you have replaced or removed. You can replace components one at a time until you see what is causing the motherboard problems. Think of it as a surprise search.

Before we show you how to test a motherboard when it’s dead, we’ll show you some bad motherboard symptoms to help you find out a lot of information.

If the computer is off, you can check the system board. Overheating, material defects and aging schedule can often lead to capacitor leakage or explosion. If you see a condenser blow, the motherboard is probably defective.

You usually need to configure it manually to enter the BIOS menu. If it finds itself during the boot process, it means that there are a number of software or hardware errors, as well as a problem with the motherboard. Because the BIOS menu manages hardware agreements for your computer, it is difficult for the motherboard to communicate with newly installed components, such as the graphics card, and the menu will appear at startup.

The appearance of the BIOS also indicates that the system board component is malfunctioning or defective.

Blue Screen of Death (BSoD), also known as Windows Stop Error, may not always indicate a problem with the motherboard.

If your motherboard is damaged, it will not be able to handle all the hardware components of your computer. This can lead to multiple application closures and delays.

How Can I Test To See if My Motherboard Is Bad?

Now you know how to test motherboards in different ways.

Use POST and other free BIOS diagnostic tools, replace the CMOS battery, or sort components after each reboot.

Every step can be tricky, but it pays off if you don’t have to buy replacement parts for your computer.

You may have a completely defective motherboard and will need to purchase this replacement. But look at the bright side. Now it’s better to diagnose things on the motherboard.

How Do You Know if Your Motherboard Is Fried?

Another way to test motherboard components is to perform a detailed physical inspection of the motherboard.

If you notice the smell or appearance of a burn and you see leaking capacitors somewhere on the board, it is likely that the board is already fried.

You can use the motherboard test multimeter to check for defective, expanded capacitors that could potentially damage your motherboard.

It is impossible to control the entire capacity, but it is possible to know if it works.

2. The computer does not turn on, freeze, or turn off unexpectedly

Thank you for trying everything, and your computer still accidentally freezes, shuts you down, and shuts down completely.

If you’ve tried usability and reassembled everything on one work computer at once, you’ve probably learned only one or two things.

Now you can figure out how to test the motherboard like any other component if a problem occurs.

However, if you’ve taken the steps here several times religiously and your computer is still not turned on, it may be time to say goodbye to the old motherboard.

3. BSOD and beeps will sound frequently

Do you always have an ugly blue screen of death every time you start your system?

Or do you hear a loud, confusing beep at startup and nothing happens on the screen?

If you have gone through all the twists and turns of the motherboard and still have a BSOD and beep, try taking it to your local repair shop.

If they can’t do something, you have to prepare your wallet to replace the motherboard.

How Do I Test My Motherboard Power?

If there are problems with your motherboard, the cause may be the power supply.

If the board shows no signs of operation, the problem may be with the PSU.

It may not be able to get the right signals or the right amount of power to get your motherboard.

You can use the PSU tester as a multimeter to check that the PSU is working properly.

If you do not, replace the PSU with one that has been shown to work and check if this is the cause of the problem. Alternatively, you can take your computer to your local technology store and they can diagnose it there.