What is plotter in computer? 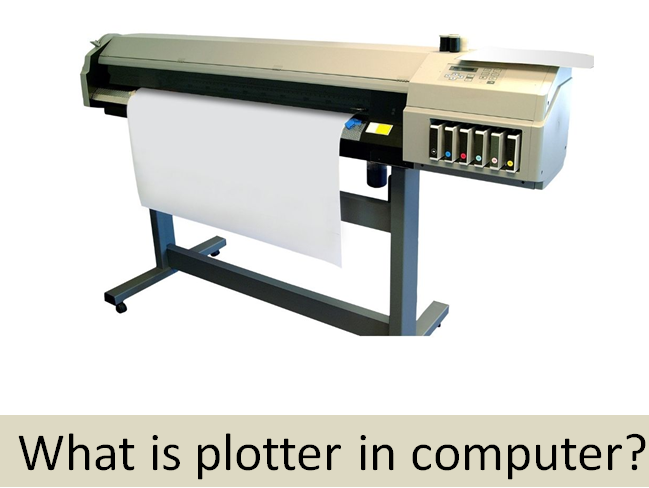 Plotter is a type of Printer that prints Vector Graphics. It is a commercial tool, commonly used to create large size graphs and maps, For an example – engineering designs, illustrations and large size posters. When a plotter operated digitally they use ‘XY Writer’ as an output device so that they can take their measurements easily and widely used for Computer-Aided Design(CAD).

Plotter defines as an output device on which we’ll make pictures with the help of a needle or pen. It is also used to prepare hard copies of charts, drawings, maps, etc. In this, a single color picture can be made with a pen and more than one pen is used to make a picture of many colors.

In short, The main function of plotter is to produce different types of designs and charts. And it draws pictures on paper by taking commands from the computer and makes a picture by making lines on the paper by using a pen. It is similar to that of a printer, but the printer does not make lines and gives output in dots.

Plotters are mainly of two types given below :

In Drum Plotter, the paper is mounted on a drum . Then the drum will rotate clock-wise and anti-clock wise. We’ll use a separate pen for each color on the head. This head further slides in a horizontal direction and computer will control its pen.

In these plotters, we’ll use fiber tip pens and in higher quality plotters technical drafting pens. In multicolored plotters we’ll use four or more than four pens.

Flat Bed Plotter, has relatively less width paper. The paper is laid, on which there is a rod available. The plotter’s head is attached to that rod. Then the rod moves forward or backward on the paper and the head moves to the right or left. After that the head moves in the X-axis and the rod moves in the Y-axis, hence this plotter is also called ‘XY plotter’. The paper remains stationary in this type of plotter.

Advantages and Disadvantages of Plotter